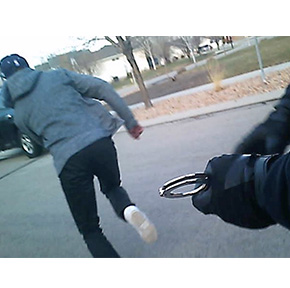 Police Departments Around the World Wrestle with Body Camera Implementation. With police groups, city officials, and civilian rights advocates calling for more transparency in all police matters, the utility of body cameras cannot be understated. A 2014 review showed that early guilty pleas were obtained in 91% of cases where body camera footage formed part of the evidence. Officers in England interviewed after a body camera pilot program last year reported that having cameras on hand helped to de-escalate dangerous situations involving aggressive suspects.

Departments around the world are now initiating body camera programs and drafting policies in an attempt to integrate cameras into their daily patrols, arrests, and drug searches. New York City Mayor Bill de Blasio recently pledged to have all 23,000 of the city’s patrol officers wearing cameras by 2019.

The trend is clear—departments are headed for full implementation. But as one might suspect with an emerging technology, there have been some growing pains around this step into the next generation of police work.

Two of the largest hurdles faced by departments in adopting body worn cameras are the cost of acquiring the cameras and the time needed to deal with the digital footage. Creating a proper framework and infrastructure to handle the data surge could mean bringing on more staff, or at the very least, creating new workflows to deal with the new data set.  Therein is the issue.

Many police departments are overtaxed as it is, with district attorneys working long overtime hours. One police department in Benton County, Oregon estimated if they fully adopted body cameras on all their officers, they would then be forced to screen and log over 144 hours of video footage per week. That type of need would require more man power and more money—two resources already in scarce supply.

“If we have people working beyond full-time and we’re expected to take on hours and hours of digital work,” says District Attorney John Haroldson, a Benton County, Oregon law enforcement official, “we would have to cut back proportionately the time we’re spending on our current caseloads.”

Police in Burbank, California echo this concern, adding that the cost of implementing the cameras is difficult to swallow in an era when many departments are habitually underfunded. Lt. Jay Hawver recently told the LA Times that it made no sense to request the roughly $570,000 to purchase the cameras for their precinct.

“There is no identifiable need for the cameras, zero public demand for them, and no substantive justification for this expense has ever been articulated,” he said.

Lt. Hawver may be in the minority though. Benton County Sheriff Scott Jackson recently commented that there is indeed a public outcry for body cameras, and that they serve a real purpose for more effective policing.

“As sheriff I’m really looking forward to the day my deputies are wearing body cams,” Jackson said. “It helps build transparency and answers the community concerns. I think they’re a great thing and I think the evidentiary value is great.”

The reliability of body worn cameras is another issue that has popped up in pilot testing programs around the globe. Police officers in London’s Scotland Yard were recently called out for using unreliable technology in their initial phase of body camera tests. Some of the devices failed, with officers calling the data captured unusable. Earlier this year, in Texas, the Houston Police Department suspended its body camera testing program after having issues with its WatchGuard cameras.

In London, an investigation into the data failures found that the issues didn’t actually have to do with the cameras themselves, but rather with the logging in and out of the cameras from the department’s system. Downloading and storing the camera’s saved footage was an issue because the antiquated computer system Scotland Yard was using resulting in data losses.

While the cost of cameras is an issue that police departments and city councils around the world will have to budget for, we here at DIGISTOR know that there are solutions to data reliability so long as the right procedures are implemented. DIGISTOR offers a portfolio of solutions for reliable law enforcement data storage, including Flash-based storage for body cameras and in-car video devices.

As police departments around the world strive to implement body cameras, you can be sure that DIGISTOR will be here to find solutions that will work for them over the long term. For more information about our suite of police storage devices, visit our product page, or reach out to a DIGISTOR sales representative today.