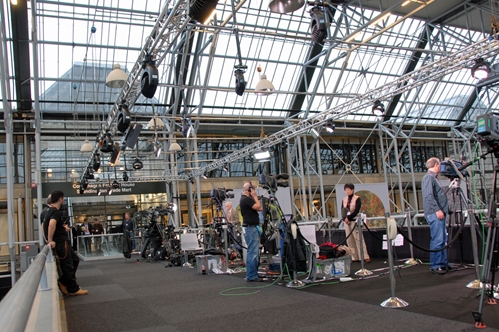 With all the numerous products clogging the high-end camera market, it can be difficult for video professionals to choose the tool that will best meet their needs. They can look at all the touted features and product specs, but in the end, what's shown on paper may not be reflected by a camera's actual performance. The only way to know for sure how well a given piece of recording equipment will operate is to work with it hands-on, testing how it runs under conditions that the average filmmaker will consistently run into.

Even with the influx of new, insightful statistics in the sporting world, many professional analysts still rely on the "eye test" to assess the skill level of an athlete. There's no better way to gauge the performance of an individual than to see how he or she responds to in-game conditions. Camera equipment is no different in this regard. Production crews can shell out a lot of money on an expensive camera loaded with impressive features. When it's crunch time, however, that piece of hardware may not provide the value that it promised.

The BMCC gets assessed
Cinematographer Shane Hurlbut recently took this approach when assessing the performance of Blackmagic Design's Cinema Camera. With several years of experience in the film industry, working on high-profile projects such as "Terminator Salvation" and "Need for Speed", Hurlbut has seen his fair share of recording equipment. That experience has no doubt helped the professional cinematographer hone a keen eye for recognizing quality in high-end cameras.

Hurlbut subjected the Cinema Camera to a barrage of tests crafted around various circumstances that professional filmmakers may routinely find themselves in. For instance, Hurlbut wanted to see how the BMCC would handle itself when the person behind the camera attempted to execute a shadow transition. The BMCC excelled in this area, providing rich clarity as an image becomes progressively darker.

The BMCC also received praise for its ability to present skin tones in a realistic and lively manner. It can be difficult to achieve such an accurate presentation of the human figure when shooting on video, but BMCC was up to the challenge. Although Hurlbut noted some redness when testing Blackmagic Design's product, he chalked that up to the lens used with the camera.

Hurlbut went above and beyond normal testing conditions to see what the BMCC was really made of. He submitted video transfers to varying levels of both over- and underexposure. While Hurlbut was able to eventually push the camera to its breaking point in these instances, he came away impressed with its versatility, resiliency and overall performance.

"[T]he BMCC is a great bargain. I will be using this camera more often with the right glass and armed with the insight I have obtained through extensive testing," Hurlbut wrote.

Use quality SSDs to support the BMCC
To truly capitalize on Blackmagic Design hardware, professional filmmakers must have an equally high-quality solid state drive in place to flawlessly process data. It can be easy to overlook the importance of acquisition media when purchasing a new piece of high-end recording equipment, but these devices can be instrumental in achieving reliable video capture.

Many SSDs on the market have not been designed with video recording applications in mind, often making them ill-suited for these tasks. For instance, they are unlikely to have been produced with the industry-standard 9.5mm form factor. SSDs created for use with laptops or PCs may feature slimmer designs, meaning they will not fit inside the BMCC without rattling around during operation and run the risk of dropped frames. That movement can also easily result in the drive itself becoming damaged, resulting in a complete loss of any video that has been stored on the device.

Instead of rolling the dice on an off-the-shelf product, filmmakers should put their faith in the Professional Video Series SSD drives from DIGISTOR. This equipment has been designed from the ground-up with recording applications in mind, giving production crews the tools they need to consistently shoot scenes without worrying about lost video. Even when shooting raw, uncompressed transfers, DIGISTOR SSDs are able to shoulder the workload and facilitate the video capture processes without losing a single frame. This means that production crews can avoid ever encountering the dreaded circumstance of needing to redo an entire day's worth of work because the acquisition media device malfunctioned and lost everything that had been recorded.

Professional shoots run on tight schedules and tighter budgets. With the many different components that must work seamlessly together on a movie, film or commercial set, there's absolutely no room for error. An off-the-shelf SSD will only introduce another unknown factor for production crews to worry about and account for. Put any lingering fears about dropped frames and lost footage to rest by embracing the unparalleled features of DIGISTOR's Professional Video Series SSD drives. If professional filmmakers are going to use high-end cameras like the BMCC, they should invest in acquisition media that will wring the best performance from this equipment.