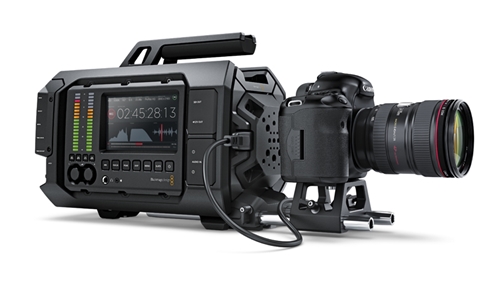 Every year, thousands of media professionals descend on the NAB Show to discover the latest and best developments in their various industries, including broadcasting and filmmaking. This conference places a great deal of focus on the strides being made in the creation of high-performance camera equipment which can aid everyone from videographers to independent movie directors. At the 2014 NAB Show in Las Vegas, Blackmagic Design threatened to steal the show by introducing two major forthcoming products.

The cameras unveiled by Blackmagic offer benefits for broadcasters with both large and small operations, further expanding its reach into the video capture market and solidifying its place as a leading provider of camera equipment. First, the company showcased its latest offering for users that require smaller hardware for their video capturing needs. The Blackmagic Design Studio Camera has been described as the smallest camera on the market that has been specifically designed for live broadcasting.

As TV Technology reported, the product offers several features aimed at supporting live shoots, including an optical fiber signal transport, 10-inch color LCD viewfinder, tally indicators and SDI connections for use with live production switchers. Officials from Blackmagic have touted the product's high-performance capabilities that are housed within its smaller-than-normal frame.

"When we looked at how we would design a camera for live production, what really surprised us was how small we could make it, but then the viewfinder would also become small," said Blackmagic Design CEO Grant Perry, according to the source. "It's really a dream to operate a camera with such a large viewfinder and it's amazing the detail in focus and framing that's available to the operator."

URSA targets large productions
Next, the manufacturer announced its latest product focused on handling the rigors of larger productions. The Blackmagic URSA camera has been crafted for use on complex and high-stakes shoots, including episodic television shows, commercials and major motion pictures. Some of the camera's more eye-popping features include a 10-inch fold-out on-set monitor, built-in scopes and dual RAW and Apple ProRes recorders to facilitate uncompressed video capture.

One of the primary concerns Blackmagic engineers faced when designing URSA was accounting for the rapid pace of product evolution in the market. Film crews' equipment needs are constantly changing, forcing them to swap out old hardware on a regular basis. This is an expensive proposition, particularly given the cost of high-end, professional-quality video cameras. The manufacturer addressed this issue by ensuring that various URSA components can be upgraded with the latest and most advanced products on the market. This way, users can get more value out of their investment.

Quality components needed
Ultimately, the 2014 NAB Show proved to be another high-water moment for Blackmagic Design. The company has grown significantly in esteem over the years, largely due to its quality products and support for uncompressed video capture. Blackmagic's dedication to equipment performance and longevity should extend to the accessories and components that support their hardware. Many of the company's existing cameras require solid state drives in order to properly shoot and record RAW video. Without the processing power of a flash-based storage device, Blackmagic equipment would be unable to provide the crisp video transfer that solidified its place in the industry. However, not all SSDs are properly configured for use with Blackmagic's preferred formats. Many off-the-shelf products are not optimized from the outset to seamlessly interact with Blackmagic cameras, requiring users to go through an arduous setup process that could delay shoots.

To eliminate such headaches and ensure that their equipment runs properly, media professionals should deploy a high-quality DIGISTOR SSD drive whenever one is required for Blackmagic use. The DIGISTOR Professional Video Series SSD has been specifically designed to make deployment a breeze and help film crews capture the best and crispest video possible.