Not all Blu-ray discs are created equal, but does BD-R quality matter?

You may have noticed some BD-R discs state a clear warning that they are LTH (Low to High type). Why do they need this warning? What are your options when buying a recordable Blu-ray disc, and does the quality of these discs matter?

Phase-change HTL media uses inorganic alloy or composite material for creating high quality Blu-ray discs. An inorganic recording layer means high resistance to the effects of UV light and aging, as well as high compatibility with multiple Blu-ray burners and Blu-ray players. All together this allows HTL BD-R discs to have a tremendously long shelf life with high compatibility across hardware, key factors in a medium that holds your data. HTL refers to the discs reflectivity during recording, changing the material from high reflectivity to low reflectivity.

The process for creating phase-change discs is unique, and rather costly to get started on the manufacturers part. HTL media requires new equipment that uses a sputtering process of coating the disc, which differs from traditional CD, and DVD manufacturing methods. However, the result is a high quality high density disc that you can trust to hold your data for decades.

LTH media is an organic dye-pigment disc that found its way into the market to offer a lower cost alternative disc in Blu-ray’s infant years. LTH refers to changing the organic dye from low reflectivity to high reflectivity. Unfortunately, since this was introduced after Blu-ray entered the market, the compatibility of these types of discs are lower, requiring hardware manufacturers to create special firmware to recognize such discs.

The manufacturing process to create LTH discs is the same as older CD’s, and DVD’s manufactured on converted CD-R and DVD-R production lines, using organic dye and a spin-coating process. Initially, this brought a lower cost disc to market. However, over time problems using organic dye-pigment for long term data storage became apparent. The organic dye has a high sensitivity to light, and lower compatibility in the market, resulting in shorter lifespan of your data on the disc, and possible issues burning or reading the data on these discs. 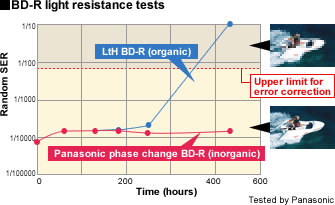 Prices of recordable Blu-ray discs have continued to drop over time. The price difference in high quality inorganic HTL and lower cost LTH media is far less than it used to be. Some manufacturers can even offer high quality HTL discs at a lower cost than most LTH media in the market [ahem… see DIGISTOR media for such high quality, low cost discs]. Data integrity is of utmost importance when storing 25GB, 50GB, 100GB or more of data. BD-R quality does matter, and when choosing a Blu-ray disc for your projects, use a high quality inorganic HTL disc for long life, data retrieval, and piece of mind.